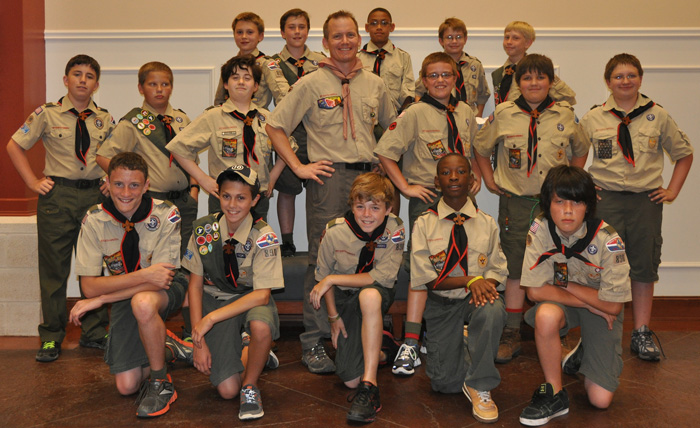 Scouts usually enter the program at age eleven, generally in the spring of their fifth grade year. However, this is not always the case. If you’re a boy age 11, or at least 10 and have completed the fifth grade, or have earned the Cub Scout Arrow of Light Award, up to 17 years old, Scouts can join at any time. In fact, we have had scouts enter the troop as late as ninth grade and go on to receive their eagle rank prior to turning eighteen.

The First Year program begins with a New Scout Parent Orientation meeting in February. At that meeting we try to have the new scouts register with the troop. The crossovers (webelos moving into scouting) can begin in January but are usually in February or March. One of the requirements of their crossover is to know the Scout Oath and Law as well as the slogan and motto.

Their first campout with the troop is usually the Camporee in March. We have a Summer Camp Orientation meeting for the parents in April to review all of the necessary forms, what to expect, hotel accommodations for the Friday night festivities, the Summer Camp kickoff dinner. We discuss the overnighter that the boys will be doing on Wednesday night during summer camp.

In May, we have a field day to work on rank advancement and have some fun. At Summer Camp in June the boys participate in the Brazos Buccaneers Program which is a Trail To First Class program. While at camp they work on Swimming and Canoeing merit badges. By the end of Summer Camp most of the boys will have earned the rank of Tenderfoot.

In July we have a campout to work on Second Class and First Class rank advancement. We usually have this campout at a State Park that has a swimming area and shower facilities. Since it is usually extremely hot in Texas in July the showers make it a little more comfortable for the dads that may not be used to camping. At the swimming hole we work on water safety and water rescue methods. We also allow plenty of time for free swim. It is a great way to cool off from the hard work from the day.

After summer camp, most of the boys sign up for our CAPS program. This is an opportunity to earn four merit badges over a three month period of time. The program includes training bike rides at White Rock Lake along with classes on bike maintenance culminating in the Iron Eagle triathlon held at the end of Labor Day weekend and a 50 mile bike ride at the Waco Wild West ride in late September. This is a great opportunity for the first year scouts to have some fun and get lots of good exercise at the same time.

During the fall we participate with regular troop activities. We will work on additional rank advancement as well as offer makeup opportunities for those that could not make all of the scheduled activities. My goal this year is to have substantially all of the boys to Second Class by December.

We will have another campout just for the first year scouts in December. The main purpose of this campout is for rank advancement and have a lot of fun. If all goes as planned most of the boys should attain the rank of First Class prior to Summer Camp of their second year.

If there are any questions that have not been answered, please contact the First Year Assistant Scoutmaster. This Dad has taken on the responsibility of organizing the first year scout activities for the current year and will be your son’s primary contact with the adult leadership of the troop throughout his scouting career.

Following is an important link explaining new parents involvement on campouts and what they should bring: