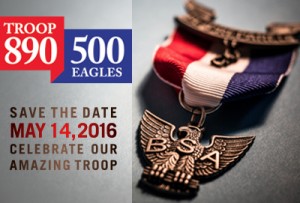 Troop 890 was chartered in 1961 by Lake Highlands United Methodist Church. The troop has remained at LHUMC over its 46 year history. The Troop meets every Monday night at 7:00 except for the Monday after campouts and breaks over the Christmas Holidays and Summer.

Charles Cook was the troop’s first scoutmaster and the first Eagle rank was presented in 1963. Over 430 boys have received their Eagle rank from Troop 890.

The Troop conducts a typical boy-led scouting program. The Troop usually has a campout a month with three in the fall semester and four in the spring semester, usually at locations close to Dallas so that scouts can participate even if they have other non-scout activities planned for a weekend. The Troop attends a week of summer camp at Camp Constantin, Circle Ten Council Sea Base on Possum Kingdom Lake, the second or third week in June.

Some of the typical campouts during the year include canoeing on the Illinois River in Oklahoma, a climbing and rappelling campout at Lake Mineral Wells State Park, a capture-the-flag campout in January, and fishing campouts at various properties around Dallas Fort Worth. In addition, an annual 50-mile hike takes place over spring break.

The troop conducts an annual service project around the holidays with Lake Highlands UMC and an annual fertilizer and trash bag sale that gives scouts the opportunity to raise money to help pay for their membership dues, summer camp and high-adventure treks.

Speaking of high-adventure treks. Each year older scouts participate in high-adventure treks across the country and around the world. Traditionally, there is usually a winter trek during the holidays to Utah, a Grand Canyon backpacking trip over Spring Break and Summer Treks that have visited Philmont, the Northern Tier Canoe Base and many of the national parks in the lower 48 and Alaska. High-adventure treks in 2004 included a backpacking trip through Yosemite National Park and a canoe trip along the Lewis & Clark route on the Missouri river in Montana.

As you can see we are a very active troop, with an emphasis on giving boys an exciting exposure to the great outdoors.