From The Official Scoutmaster’s Handbook 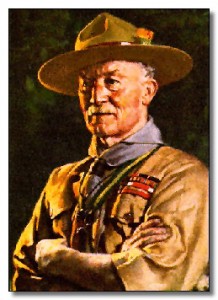 Boy Scouting began as a training program for young soldiers under the command of British Army officer Robert S.S. Baden-Powell, who was always dissatisfied with the ability of soldiers to carry out reconnaissance and to care for themselves under primitive conditions.

In India in 1897, with his first regimental command, Baden-Powell had full freedom to use his training ideas. He had men train in small groups, made their training hard but enjoyable, and gave them increasing responsibilities. Soldiers who became efficient were called scouts. To record his methods, Baden-Powell wrote a small volume, Aids to Scouting, for military use.

In 1899, the talented but obscure officer found himself in charge of a regiment in Mafeking, South Africa, under siege by a force of 9,000 Boers, descendants of the Dutch settlers who had first colonized South Africa. British forces were badly outnumbered, but Baden-Powell kept the Boers from overrunning the city by a combination of bluff and boldness. As news of relief of the 217-day siege reached England, Baden-Powell became a hero.

Boy Scouting evolved in Baden-Powell’s mind as a result of two unrelated developments.

The first was his review, in 1903 and 1904, of the Boy’s Brigade, an uniformed, quasi-military organization for English boys. As the hero of Mafeking, the boys accorded Baden-Powell a worshipful reception. Their enthusiasm and interest impressed him, but he was sorely troubled by the militarism shown in their drilling, uniforms, and toy rifles.

The second development was his review of his manual; Aids to Scouting. It had enjoyed an astounding sale to English boys. Baden-Powell realized that it would never do as a book for boys. It was written to prepare men for war. What he wanted was a book to prepare boys for peace.

So began Baden-Powell’s quest for all the literature of the world about training boys for manhood. He searched everywhere.

By 1907, Baden-Powell’s thinking had crystallized enough to get reactions from men whose opinions he respected. Replies were encouraging, and in the summer of that year he sought the answer to the ultimate question: How would boys take to this idea?

To find out, he organized the world’s first Boy Scout camp. Twenty-two boys, from farm and city, went to Brownsea Island off England’s southern coast, to camp as Scouts.

The heart of Baden-Powell’s idea was the patrol method, and almost the first thing done at the camp was to divide the boys into four patrols.

This first Boy Scout camp was not greatly different from Boy Scout camps today. There was plenty of Scoutcraft practice, games, competition, campfires, and patrol overnight camps away from the Troop.

The camp was a rousing success in the eyes of both Baden-Powell and the boys. The secret was the patrol method in which he said, “Each patrol leader was given full responsibility for the behavior of his patrol at all times, in camp and in the field…. Responsibility, discipline, and competitive rivalry were thus at once established and a good standard of development was ensured throughout the troop.”

Baden-Powell followed a three-stage procedure. Each night at the campfire Baden-Powell told a story about one of his adventures where some Scoutcraft skill helped him. The next morning, he showed the Scouts how to acquire the skill. In the afternoon, he created a situation in which the patrols had to use that skill.

After that camp, the next big step for Baden-Powell was the writing of a handbook for boys and a booklet for Scoutmasters. The handbook, called Scouting for Boys, was published in five parts early in 1908, and later that year in book form. It was an instant success.

Within a few months there were tens of thousands of Boys Scouts in Great Britain. They were guided by Scouting for Boys and a new weekly magazine, The Scout. Baden-Powell formed what was to become the British Boy Scouts Association. 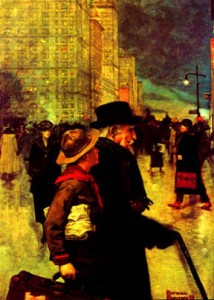 Scouting had come to America even earlier than 1910. With the publication of Scouting for Boys in 1908, troops began forming at several locations in the United States, many in YMCA’s, but there was no formal structure or organization for them.

The official birth date for the Boys Scouts of America is February 8, 1910. William D. Boyce, a Chicago publisher, who had happened upon Scouting in 1909 while passing through London on a trip to Africa, incorporated it on that date. Lost in a thick fog, he was approached by a boy who offered to help him. To Boyce’s astonishment, the boy would not accept a tip because he said it was a Good Turn, and a Scout could not accept pay for such an act. Boyce went to British Scout Headquarters to find out what kind of program would have such an effect upon a city boy. When he sailed for home, he had a trunk full of Scouting literature, insignia, and uniforms.

Boyce willingly joined the common effort when he found others also trying to start a Scouting movement. Among them were two men whose influence on Scouting is felt to this day. 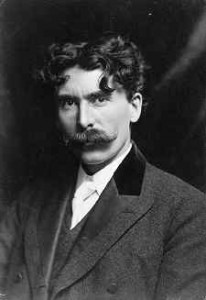 Ernest Thompson Seton, world famous as naturalist, author, illustrator, and lecturer on wildlife and the wilderness, was also head of the Tribe of the Woodcraft Indians, a loose organization of boys who wrote to him after reading his nature books.

Seton was chairman of the committee on organization and the first Chief Scout of the BSA. He was also the primary author of the first Handbook for Boys published in 1911. 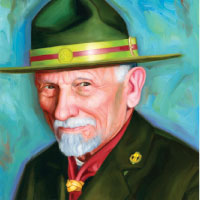 Daniel Carter Beard, another leader of an existing boy’s organization, was a writer and illustrator of hundreds of magazine articles on outdoor life. His boys’ organization was called the Society of the Sons of Daniel Boone. It stressed the lore and pioneering spirit of such great American scouts and outdoorsman as Boone, Kit Carson, Davy Crockett, and Audobon.

With Seton, Beard merged his own boys’ organization into the young Boy Scout movement. He became one of three national Scout commissioners, a member of the national Executive Board, and chairman of the National Court of Honor. Until his death at 91, Beard was a familiar figure at any big Boy Scout event, unmistakable in the frontier garb he wore.

Late in 1910, as a small group of national leaders was struggling with the problems of a new organization, they brought into Scouting a man whose impact upon the movement was to be no less than that of Seton and Beard. 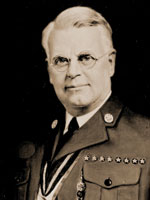 He was James E. West – a man as opposite to Beard and Seton as could be imagined. An attorney, he was then making a name for himself in youth work. From having spent his childhood in an orphanage, West had come to know first-hand some of the problems of the young. He was crippled throughout his life by a tubercular hip. Yet these handicaps had not prevented him from working his way through high school, college, and law school.

The founders talked West into taking the job of “executive secretary” of the BSA for 6 months, beginning January 1911. The 6 months lasted 32 years; West finally retired as Chief Scout Executive in 1943.

Seton and Beard had brought to Scouting the magic of the campfire and love of the outdoors. West brought limitless vision and administrative talent.

With the national organization beginning to take shape in 1911, national leaders turned their attention to local and regional organization, and to such vital matters as the Scout Oath and Law, rank requirements, and badges.

In the Scout Oath, the British version was closely followed, but the phrase “to keep myself physically strong, mentally awake, and morally straight” was added.

Baden-Powell’s Scout Law contained nine points (see the back page of this handbook). They were adopted by the BSA with minor variations, and three were added: Brave, Clean, and Reverent.

As in England, Scouting swept the country as soon as boys heard about it. Even in 1911 there were 5,000 troops in the United States. There were 14 merit badge subjects then, and 30 Scouts managed to earn a total of 83 among them that year.

To keep leaders and boys informed two magazines began. Scouting, for adults, was first published in 1913, and the Scouting movement in 1912 purchased Boy’s Life, a magazine for young boys.

When the United States entered World War I in 1917, the Boy Scouts of America were well known but not a household name. Scouting’s work on the home front made it so. Fewer than 300,000 Scouts sold $3.5 million in Liberty Bonds after others had canvassed the field, raised over $43 million by selling war stamps, collected over 100 carloads of fruit pits for use in gas mask filters, operated 12,000 war farms and gardens, distributed 30 million pieces of government literature, and cooperated in numerous ways with many organizations. The value of Scout training came home to the American people, and Scouting became part of the American scene.

The services of Scouts in the years since 1910 make an incredible bank of statistics; more than 64 million Americans have been involved in the movement in these decades. The vigor and extent of the movement and its influence have long since grown far beyond the most extravagant dreams of its founders.

Yet Scouting is not just an American phenomenon. Every free country in the world uses the program. Although the United States leads the world in numbers of members, there are millions of Scouts around the world. It is said that one can raise his hand in the Scout sign anywhere in the free world and find a friend. World jamborees and other international visits and correspondence help to maintain and expand the brotherhood of Scouting.